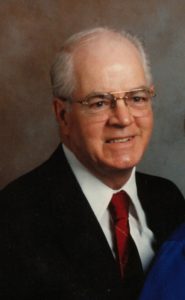 Born in Paradise on December 3, 1923, he was the son of the late William J. and Roseanna Armer Feister, and was a proud US Army veteran of WWII serving in the European Theatre. Harold is survived by two sisters, Beulah Hershey of Willow Street and Gloria Barker of Lancaster, and many nieces and nephews. He retired from Huth Engineering in 1988.

Besides his parents, Harold was preceded in death by nine brothers and four sisters, and a son Michael Harold Feister.

The Feister family wishes to extend its heartfelt thanks and gratitude to the staff of United Zion Retirement Community and to the staff at Grane Hospice of York for his care.

Thomas F. Feister, 79, of Honey Grove, PA, and formerly of Kinzers, died Tuesday at the Lewistown Hospital following a lengthy illness. He was the husband of Rhoda Brackbill Feister for 55 years.

He graduated from Paradise High School in 1943. He then served in the US Navy on the USS Intrepid during WWII. Mr. Feister was a self employed painting contractor from 1958 until retiring in 2001. He was a Protestant by faith.

Mr. Feister was a member of Christiana Lodge 417 F. &. A. M., the Lancaster Lodge of Perfection, a life member of the P.J. Bair VFW Post 7418, Gap, and the American Legion Tanawa Post 409, Paradise. An avid hunter and trout fisherman, he had served as former Vice President of the Paradise Rod and Gun Club. He and his wife enjoyed traveling.

VIEWING: Friday from 7 to 9 PM at the Brown Funeral Home, 3214 Lincoln Highway East, Paradise. MASONIC SERVICE: by Christiana Lodge 417 F. &. A. M. on Friday at 8:30 PM. VIEWING: Saturday from 10 to 11 AM at St. John s United Methodist Church, 3001 Lincoln Highway East, Paradise. FUNERAL: Saturday at 11 AM at the church with The Reverend Joseph Puckhaber officiating. Interment in Hershey Mennonite Cemetery. In lieu of flowers, please make a contribution in his memory to American Lung Association of Lancaster County, 630 Janet Ave., Lancaster, PA 17601. www.bachmanfuneral.com

F, b. 17 December 1932, d. 14 March 2022
Beulah Janet Feister was born on 17 December 1932 at Paradise Twp, Lancaster Co, Pennsylvania.1 She married Clifford Hershey, son of Henry Clay Hershey and Edna Esbenshade Hershey, on 29 September 1951.2 Beulah Janet Hershey died on 14 March 2022 at Hospice & Community Care, Mount Joy, Lancaster County, Pennsylvania, at age 89. Her obituary: Beulah F. Hershey, age 89 of Willow Street, passed away on Monday, March 14, 2022 at the Hospice and Community Care of Mount Joy. She was the wife of the late Clifford Eby Hershey. Born in Lancaster, she was the daughter of the late William and Rosanna Armor Fieister. Beulah was a member of St. John's United Methodist Church in Paradise. She worked in the Pequea Valley School cafeterias and as a hostess for the Wagon Wheel. Beulah loved spending time with her family, especially her grandchildren and great grandchildren.

Funeral service will take place at St. John's United Methodist Church, 3294 Lincoln Highway East, Paradise, PA, on Friday, March 18th at 11 a.m. with a viewing from 10 a.m. until the time of service. Pastor Rob Stippich will be officiating. There will also be a viewing time on Thursday evening from 6 to 8 p.m. Interment will be in the adjoining church cemetery. In lieu of flowers, contributions may be made in Beulah's honor to Hospice and Community Care, P.O. Box 4125, Lancaster, PA 17604, The Leukemia Society, P.O. Box 22324, New York, NY 10087, or St. John's United Methodist Church, P.O. Box 86, Paradise, PA 17562. shiveryfuneralhome.com

Rhoda Lefever Feister, age 88, of Lancaster, passed away on Sunday, November 8 at her home. She was the wife of the late Alvin L. Feister who died in 2016. Born in Paradise, she was the daughter of the late Clarence and Nora Reeser Lefever.

She graduated from Paradise High School, Class of 1949. Rhoda was a member of Calvary Monument Bible Church in Paradise. She previously worked in the Paradise Post Office as a mail carrier, drove school bus and worked in several nursing homes.

She is survived by her daughter, Rhonda Rhoades of Lancaster, and two siblings: Mary Jane Hershey of Lancaster and Clarence, husband of Cleta Robinson Lefever of Gap, and her adoring grand-dog, Graci.

Services will be at the convenience of the family with interment in the Calvary Monument Cemetery. In lieu of flowers, contributions can be made in Rhoda's memory to Calvary Monument Bible Church, 1660 Mine Road, Paradise, PA 17562

F, b. 13 January 1928, d. 28 December 2011
Helen Elizabeth Armer was born on 13 January 1928 at Bart Twp, Lancaster, Pennsylvania. She married David Clay Farmer, son of James Farmer and Margaret Jones, on 14 February 1970 at Presbyterian Church, Bart Twp, Lancaster, Pennsylvania. Helen Elizabeth Armer died on 28 December 2011 at Presbyterian Home, Quarryville, Lancaster, Pennsylvania, at age 83; Helen E. Farmer, 83, of 203 Broadmoor Drive, Willow Street, PA died Wednesday, December 28, 2011 at Quarryville Presbyterian Retirement Community where she was a resident since April. She was the widow of David C. Farmer who died September 1973.
Helen was born in Bart Township, a daughter of the late Frank B. and Cornelia Tweed Armer. She was a member of Middle Octorara Presbyterian Church and a volunteer for the Quarryville Library. She retired from Commonwealth Telephone Company in 1991 where she was employed as a supervisor and secretary for 45 years.
Surviving her is a daughter, Susan D. married to Daniel E. Hollinger of Willow Street; a brother, Paul Armer of Quarryville; two sisters, Pauline wife of Robert Woods of Huachuca, AZ and Elvina married to Fred Hagerty of Lancaster. Helen was preceded in death by a brother, ­Donald Armer.
Funeral services will be held from Reynolds Funeral & Cremation Services, Inc., 144 East State Street, Quarryville, PA on Saturday, Dec. 31st, at 11:00 AM with Rev. Douglas Hileman officiating. Interment will follow in ­Middle Octorara Presbyterian Cemetery. A viewing will be held from 10:00 AM until the time of service on Saturday. Kindly omit flowers. Contributions may be made in Mrs. Farmer's memory to Quarryville Library, P. O. Box 678, Quarryville, PA 17566. To send an online note of condolence, please visit our website
reynoldsfuneralhome.net