F, b. circa 1838, d. 23 August 1861
Leah Richwine was born circa 1838 at Pennsylvania.2 She married James A. Gregg, son of William Gregg and Grace Amelia Long, on 11 January 1855.3 Leah Richwine died on 23 August 1861.
As of 11 January 1855,her married name was Gregg.3 She and James A. Gregg appeared on the census of 18 July 1860 at Salisbury Township, Gap Post Office, Lancaster, Pennsylvania; James is age 28, Leah age 24, Ann M., 3 and Mary Richwine 58. James is recorded as being a Farm Laborer and listed between Farm Owners James McCauley and Henry Eby. On Bridgens1864 Lancaster County map those farmers are listed as being in area close to north side of present day US 30 in the vicinity of Hensel Rd. McCauley Farms are along Hensel Rd.2 Leah Richwine and James A. Gregg Administrative Account records the naming of Benjamin Brackbill as guardian of their daughter, Anna M. Gregg. in 1874 at Lancaster, Pennsylvania.4

Photo included with her obituary

Patricia D. Gregg, age 67, of Gap, passed away on Monday, January 2, 2012 at the Brandywine Hospital. She was the wife of J. Harold Gregg with whom she celebrated 18 years of marriage on August 15th of last year. She was born in West Chester, daughter of the late William & Edith Thomas Dowlin. Pat graduated from Conestoga High School class of 1962. She was a Loan Officer for Citadel Federal Credit Union of Lionville, PA. She was a member of the Christiana American Legion and the Gap V.F.W.

A Memorial Service will take place on Thursday evening, January 5th, at 7 p.m. from the Faith Bible Chapel, 140 Bernard Avenue, Cochranville, PA with a time to greet the family from 6 p.m. until time of service. Pastor Scott Althouse will be officiating. Interment will be at the convenience of the family. In lieu of flowers, contributions may be made to the Wounded Warrior Project, 4899 Belfort Road, Suite 300, Jacksonville, FL 32256.

shiveryfuneralhome.com.6
She was graduated in 1962 at Conestoga High School, Chester, Pennsylvania.7 Her married name was Hayman. She was associated and a member of Christiana American Legion and the Gap VFW.7 She was employed by Citadel Federal Credit Union as a loan officer between 1993 and 2012 at Lionville, Chester, Pennsylvania.7 She attended a 50th wedding anniversary party for Ted and Eleanor on 7 August 1993 at Hustontown, Pennsylvania.

As of 15 August 1993,her married name was Gregg. She was included the Fire Hall Christmas party in December 1999.

She attended was given an 80th birthday party on 29 July 2006 at Log Cabin Court, Est Earl, Pennsylvania.

Linda was a homemaker and a member of Pequea Presbyterian Church where she had served as treasurer. She was also a member and treasurer of both the Honey Brook Township Grange and the White Horse Fire Company Ladies Auxiliary.

She was preceded in death by a son, Brent Seldomridge.

Due to the current health pandemic, services will be private at this time. Burial will be in Pequea Presbyterian Cemetery. The Groff-High Funeral Home, New Holland is in charge of arrangements.2 She was buried on 29 April 2020 at Pequea Presbyterian Cemetery, Gap, Lancaster, Pennsylvania.2 Linda Lee Murray Find-a-Grave.com ID # 209513430.
She was listed as a resident in Raymond Murray and Lottie (Dit) Viola MURRAY's household in the census report on 4 April 1950 at Bart Township, Lancaster, Pennsylvania; John Murray is recorded as grandfather and Linda is recorded as a niece.3 Linda Lee Murray Raised by father's brother Raymond family before 1963.4 As of 15 November 1963,her married name was Seldomridge.

M, b. 14 May 1867, d. 15 January 1921
Joseph Jordon Bryson was born on 14 May 1867 at Nickle Mines, Paradise Township, Lancaster County, Pennsylvania.3,1 He married Ella M Berkey. Joseph Jordon Bryson died on 15 January 1921 at 8 N Front St, Wormleysburg, North Umberland, Pennsylvania, at age 53; Cause of death was tuberculosis of the kidneys. His obit: Patriot newspaper, Harrisburg, PA, mortuary notice, Tuesday, January 18, 1921:
Joseph J. Bryson, 53 years old, died at his home, 8 North Front street, Wormleysburg, on Saturday, following a short illness. Funeral services will be held tomorrow at 1 p.m. at the house, with burial in the Enola Cemetery. Mr. Bryson is survived by his widow, Ella A. Bryson, and thre sons, Joseph C, Herbert and George Roy Bryson.1,4 He was buried on 18 January 1921 at Enola Cemetery, Enola, Cumberland County, Pennsylvania.4 Joseph Jordon Bryson Find-a-Grave.com ID # 51067534.
He Listed on 1870 Census with parents Paradise Twp in 1870. He appeared on the census of 1870.5 He appeared on the census of June 1880 at Paradise Township, Lancaster, Pennsylvania.6 He was a railroad conductor before 1921 at Wormleysburg, Pennsylvania.1 He and Ella M Berkey This family researched by Rosemary Donaldson and can be reached at DonaldsonRosema@aol.com on 10 July 2003.

M
Alan Mohn died at Harrisburg, Pennsylvania. He married Lillie Bryson, daughter of Joseph Lefever Bryson and Johanna Clark, after 1890.
Alan Mohn witnessed the death of Lillie Bryson on 4 May 1957 at Polyclinic Hospital, Harrisburg, Dauphin, Pennsylvania; Cause of death was Cardio Vascular problems due to hypertenion and diabetes.1 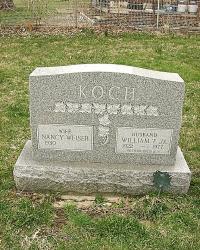 As of before 2011, John Koch lived at 406 Hartman Bridge Rd, Strasburg, Pennsylvania.