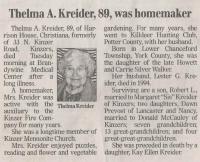 Mrs. Kreider was the wife of the late Lester G. Kreider who died in 1994. A homemaker, she had been active with the Auxiliary to the Kinzer Fire Company for many years. She was a long time member of the Kinzer Mennonite Church. She enjoyed puzzles, reading and flower and vegetable gardening. She went to the Killdeer Hunting Club in Potter County for many years with her husband.

Born in Lower Chanceford Township, York County, she was the daughter of the late Howett and Carrie Silver Walker. She is survived by a son: Robert L. married to Margaret "Sis" Kreider of Kinzers; 2 daughters: Dawn Prevost of the Mennonite Home and Nancy married to Donald McCauley of Kinzers; 7 grandchildren, 13 great-grandchildren and 4 great-great grandchildren; The last of her immediate family, she was preceded in death by a daughter: Kay Ellen Kreider and a grandson: James Prevost.

In lieu of flowers, kindly consider mailing a contribution in Thelma's memory to the Kinzer Fire Company Auxiliary, PO Box 82, Kinzers, PA 17535.1 She was buried on 3 January 2004 at Paradise Mennonite Cemetery, Paradise, Pennsylvania.2 Thelma Anetta Walker Find-a-Grave.com ID # 55034980.5
As of May 1938,her married name was Kreider.4,2 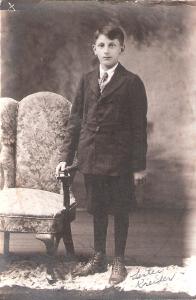 Census taker was Willis Kreider for this district in Salisbury Township, pages written by him.
He was a farmer until 1955. From 1955 to 1967, he was employed as a mason for R. F. Groff masonry contractor. Following his work as mason, he was a truck driver for Kreider Bros. until his retirement in 1974. before 1955.3