She attended J.P. McCaskey High School. She worked for Hubley and RCA. Marilyn enjoyed playing piano, crafts, bingo and trips to Ocean City, MD. She especially loved the over 20 yearly trips to Las Vegas, NV with her husband, Jack Eugene Leese who passed away in 2006 after 55 years of marriage.

The family would like to thank the nurses and staff at Moravian Manor for the wonderful care they provided during her stay. Burial will be private and at the convenience of the family.

Born in Manheim, PA, he was the son of the late Elmer Leese and Laura Fink Ober. He and his wife, Marilyn D. Ulmer Leese, celebrated their 55th wedding anniversary last October.

Mr. Leese retired as the manager of the auto body shop for Brubaker Motors after fifty years. He was a graduate of J.P. McCaskey High School, class of 1945.

He served in the U. S. Army during WW II as a staff sergeant.

He was a member of the Presbyterian Faith.

In addition to his wife, he is survived by four sons, Bruce A., husband of Sharon K. Leese of Lititz, Roger D., husband of Frances L. Leese, of Manheim, Kevin J., husband of Victoria A. Leese and Brian K. Leese, all of Lancaster; seven grandchildren and four great grandchildren. He was preceded in death by a brother, Paul Leese.

Relatives and friends are respectfully invited to attend Jack s Life Celebration service from the Funeral Home of Fred F. Groff, Inc., 234 W. Orange St., Lancaster, PA, on Monday at 7:30 PM. Interment will be private at the convenience of the family. The family will receive friends at Groff s on Monday from 6:00 PM until time of service. Please omit flowers. If desired, memorial contributions may be sent to the charity of one s choice. Fred F. Groff, Inc., A Life Celebration Funeral Home 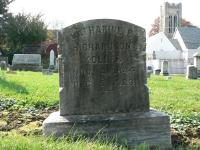