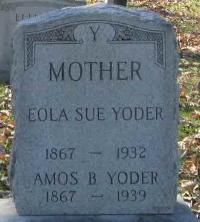 Amos B Yoder was born on 14 October 1878 at Paradise, Lancaster, Pennsylvania. Death certif states birth date is Oct 14 1878. Social Security application states birth date as Oct 14, 1878, parents as Saul C Yoder and Maggie Johnson. SS # 196105148.1,2,3 He married Eola Sue Kendig, daughter of Samuel B Kendig and Margaret Miller, circa 1887.4 Eola Sue Yoder filed for divorce from Amos B Yoder before 1930; Her death certificate doesnot indicate her divorce.5 He married Ruth A Griffith.6 Amos B Yoder died on 13 March 1937 at Lancaster, Lancaster, Pennsylvania, at age 58. Cause of death was cancer of the prostrate.7

Eola Sue Kendig was born on 31 March 1867 at Providence Township, Lancaster, Pennsylvania.1,5,2 She married Amos B Yoder, son of Christian S Yoder and Rebecca Johnson, circa 1887.1 Eola Sue Yoder filed for divorce from Amos B Yoder before 1930; Her death certificate doesnot indicate her divorce.6 Eola Sue Kendig died on 13 January 1932 at Lancaster, Lancaster, Pennsylvania, at age 64. Cause of death was chronic myocarditis, contributory was Epilepsy.2

A homemaker, Dawn had also worked with Goodwill Industries.

She was a long-time member of Calvary Monument Bible Church.

Dawn previously served on the Board of Directors of United Cerebral Palsy.

Born in Salisbury Township, she was the daughter of the late Lester G. and Thelma (Walker) Kreider. She is survived by a brother, Robert L. Kreider; a sister, Nancy M. married to Donald McCauley, all of Kinzers; and nieces and nephews. Dawn was preceded in death by a son, James L. Prevost.

There will be a Graveside service on Thursday, January 30, 2014 at 11 AM in Paradise Mennonite Cemetery, Cherry Hill Road, Paradise, PA, with Chaplain Dorcas Martzall officiating.