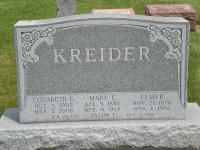 Mary E Eby was born on 5 April 1880.1 She married Elmer Kreider, son of Jacob Buckwalter Kreider and Lydia Hershey Groff, circa 1904.1,2 Mary E Eby died on 11 April 1969 at age 89.1 She was buried on 15 April 1969 at Paradise Mennonite Cemetery, Paradise, Lancaster, Pennsylvania.1
Her married name was Kreider.1 She and Elmer Kreider appeared on the census of 19 April 1910 at Leacock Township, Lancaster, Pennsylvania.2 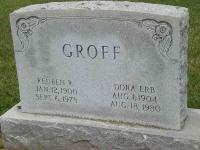 A Civil War veteran, he enlisted and mustered into federal service at Lancaster September 6, 1861, as a private with Co. B, 79th Pennsylvania Infantry. He re-enlisted as a Veteran Volunteer February 12, 1864, at Chattanooga, Tennessee, and promoted to corporal, date unknown. He honorably discharged with his company July 12, 1865.