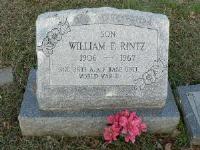 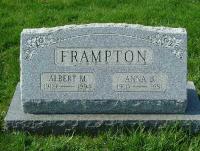 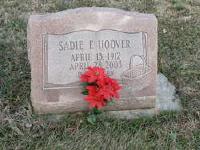 Mrs Hoover was a former laborer and packer at Keystone Pretzel Bakery, the former Lancaster Garment Factory and the former Hamilton Watch Co.

She was a Protestant.

She enjoyed going to market, crocheting and crafts.

Born in Lancaster, she was the daughter of David and Clara Ruth Rintz. 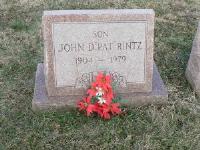 F, b. circa 1905
Edith (?) was born circa 1905.1 She married Harry S. Rintz, son of David Alexander Rintz and Clara Ruth.1
Her married name was Rintz.1 Edith Rintz and Harry S. Rintz appeared on the census of 23 April 1930 at 431 Clay St, Lancaster, Pennsylvania; During this census Robert, Eva and their three children were living with Robert's brother, Harry, and his wife Edith.1 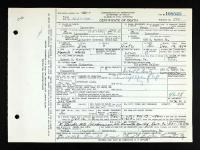 Mrs. Eva M. Rintz, fifty-one, wife of Robert E. Rintz, 628 N. Market St., died today at 4:30 a.m. in the Lancaster General Hospital after an illness of three weeks. An autopsy is being performed to determine the cause of death. She was born in Parkesburg, a daughter of the late Mr. and Mrs. Charles Pinkerton. She was a member of the Sunnyside Mennonite Mission.

Also Gospel Herald Newspaper March 1957
Rintz, Eva, daughter of Charles and Elizabeth Keller, Pinkerton, was born in Parkesburg, Pa; departed this life in Lancaster General Hospital; Dec. 13, 1956; aged 51 years. Surviving are her husband, the following children (David C., Mary-Mrs. Charles Van Aulen, Lancaster; Esther-Mrs. Mrs. John Parthemer, Parkesburg, and John W., Lancaster), 5 brothers, 3 sisters, and 15 grandchildren. She accepted Christ as her Saviour in her early married life and united with the Mennonite Church, being among the first group of converts at the Sunnyside Mission near Lancaster. She was greatly afflicted in body for several years, having been in the hospital for different treatments at least 16 times, and she passed through great trials in the home, but bore it with great patience, appreciating the privilege of worshiping at the mission whenever health permitted. Funeral services were held at the Sunnyside Mission on Dec. 15, in charge of David High, assisted by Witmer Barge and Joe Miller. Burial was made in Riverview Cemetery.4,7 She was buried on 16 December 1956 at Riverview Cemetery, Lancaster, Lancaster, Pennsylvania.4 Eva Marie Pinkerton Find-a-Grave.com ID # 65359633.4
As of circa 1921,her married name was Rintz.1 She appeared on the census of 23 April 1930 at 431 Clay St, Lancaster, Pennsylvania.1 She and Robert Elwood Rintz lived on 1 April 1935 at Soudersburg, East Lampeter Township, Lancaster, Pennsylvania.8 Eva Marie Pinkerton and Robert Elwood Rintz appeared on the census of 26 April 1940 at Soudersburg, East Lampeter Township, Lancaster, Pennsylvania.8 Eva Marie Pinkerton lived on 13 December 1956 at 628 N Market St, Lancaster, Lancaster, Pennsylvania.4