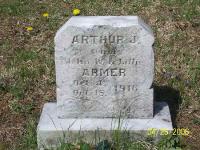 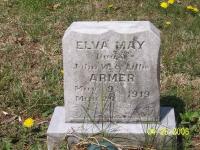 He was born in Bart Township to John and Lillian May (Rineer) Armer and was the husband of Elsie (Enck) Armer. They were married 62 years in December.

Victor served in the US Army during World War II from 1944 to 1946 in Texas and the Phillipines.

He was a member of the Brunnerville United Methodist Church, where he served as an usher, and VFW Post #5956 of Manheim. Victor enjoyed hunting, fishing, and spending time at the family cabin in Sullivan County. He was a Phillies fan.

He was preceded in death by a daughter, Joanne Armer and brothers, Harry Armer and Marvin Armer.

Memorial contributions in Victor's memory may be made to Hospice of Lancaster County P. O. Box 4125 Lancaster, PA 17604 or to the Brunnerville United Methodist Church 517 Pine Hill Road Lititz, PA 17543.

Lancaster Intelligencer Journal/New Era 6/13/2011.2 He was buried on 9 June 2011 at Brickerville Lutheran Cemetery, Brickerville, Lancaster, Pennsylvania; Memorial Service held at Brunnerville United Methodist Church, 517 Pine Hill Rd, Lititz on June 19, 2011 at 2:30 pm. Pastor Jim Bamberger officiating. Private interment.2 Victor John Armer Find-a-Grave.com ID # an unknown place ; 71242880.
He appeared on the census of 7 April 1930 at Bart Township, Lancaster, Pennsylvania; Living with Uncle George Weaver and Aunt Anna E Weaver.????3 He began military service in 1944 at Texas Served in the US Army in Texas and the Phillipines.4 He ended military service in 1946.4 He was an employee of and worked for Penn Dairies for 43 years. Following retirement from Penn Dairies he became a Lancaster Newspapers (New Era) delivery person for 18 years.4 He witnessed the death of Joanne Armer on 24 February 1950 at Osteopathic Hospital, Lancaster, Lancaster, Pennsylvania; Cause of death was premature birth, she lived 4 hrs and 50 min.5 Victor John Armer witnessed the death of John W (Jack) ARMER on 24 November 1956 at 217 N Pitt St, Manheim Boro, Lancaster, Pennsylvania; Cause of death was cancer of the esophogus.6

F, b. 7 March 1928
Millicent J Book was born on 7 March 1928 at Lancaster, Pennsylvania. She married Lester H Warfel, son of Benjamin S Warfel and Elise Viola Herr, on 30 June 1948 at Alexandria, VA.1 Millicent J Book was buried after 1970 at Quarryville Cemetery, Quarryville, Lancaster, Pennsylvania.2
As of 30 June 1948,her married name was Warfel.

Robert C. Denlinger, 80, of Paradise, died Wednesday, August 15, 2007, at Lancaster General Hospital from Pulmonary Fibrosis. Born in Kinzers, he was the son of the late Walter S. and Nora Armer Denlinger.

A 1944 graduate of the former Paradise High School, he earned his Bachelor of Science in Education from Franklin and Marshall College in 1950 and his Master of Education from Temple University in 1962. Bob taught at Pequea Valley High School for 7 years, before moving to Octorara School District, where he was a teacher, administrator and director of federal programs for the district for 29 years. He retired in 1989. He was a member of the P.S.E.A. the N.E.A. and was the commissioner's assistant for the PA Department of Education. Bob also worked at the Amish Farm and House for 45 years.

Bob was a member of Leacock Presbyterian Church in Paradise, Paradise Township Lions Club and Christiana Masonic Lodge #417 F. & A.M. He served with the Army Corps of Engineers during World War II. He enjoyed local history, genealogy, rug braiding, gardening, music, and his cabin in Pine Grove Furnace State Park. Bob was the writer/editor of local history for "250 Years in Paradise" and "Paradise Our Heritage, Our Home".

Eva Denlinger.1
Robert C Denlinger lived at Oak Ln, Paradise, Pennsylvania. He appeared on the census of 23 April 1940 at Paradise Township, Lancaster, Pennsylvania.2 He was ill with Pulmonary Fibrosis before August 2007.1

A graduate of the former Paradise High School, Eva earned her Bachelors Degree in Education from West Chester University and her Masters in Education from the University of Delaware. Eva was a teacher, coach, guidance counselor, and administrator in the Brandywine School District in Delaware. Her lifelong dedication to the education of young people was a source of inspiration and encouragement to many. She was a fifty year member of Leacock Presbyterian Church, Paradise.

Eva is survived by her brother Robert C., husband of Betty Shirk Denlinger of Paradise; her sister Charlotte E., wife of Robert Summers of Narvon; 16 nieces and nephews; and her close friend, Elaine Patton, of Broomall, Pa. Her brothers Clair W. and Thomas A. Denlinger, and a niece and nephew preceded Eva in death. Private Committal Service.

Memorial gifts in Honor of the life of Eva M. Denlinger are suggested to offer support and thanksgiving for the work of the Hospice of Lancaster County and the National Alzheimer's Association. Donations should be sent to: "Hospice of Lancaster County" (Designated for "Coping Kids"), P.O. Box 4125, Lancaster, Pa 17604-4125; or sent to the "Alzheimer's Association", 225 N. Michigan Ave., Fl. 17, Chicago, Ill. 60601-7633.1 She was buried on 18 July 2007 at Leacock Presbyterian Cemetery, Paradise, Lancaster, Pennsylvania.2
She appeared on the census of 23 April 1940 at Paradise Township, Lancaster, Pennsylvania.3

M, b. 4 February 1932, d. 1 October 1975
Thomas Armer Denlinger was born on 4 February 1932. He married Kathleen Clark, daughter of Landis G Clark and Elva Usner, on 24 June 1954. Thomas Armer Denlinger died on 1 October 1975 at age 43.
He appeared on the census of 23 April 1940 at Paradise Township, Lancaster, Pennsylvania.1 He was listed as a resident in Walter S Denlinger and Nora Elvina Armer's household in the census report on 27 April 1950 at Paradise Township, Lancaster, Pennsylvania.2

She was buried on 29 October 1943 at Middle Octorara Presbyterian Church, Bart Twp., Lancaster, Pennsylvania.3 Mary Gertrude Armer Find-a-Grave.com ID # 91048357.
She appeared on the census of 8 June 1900 at Paradise Twp., Lancaster, Pennsylvania.4 She appeared on the census of 16 April 1910 at Kinzer Road, Paradise Township, Lancaster, Pennsylvania.5 As of 29 March 1917,her married name was Myers. She lived on 7 July 1927 at Christiana, Lancaster, Pennsylvania.6 She and John Williams Myers appeared on the census of 12 April 1930 at Bart Township, Lancaster, Pennsylvania; 2 twin neices and 1 nephew were living with this family at time of this census.
Edith and Edna Wilson are the twins and they lived with John and Gertrude in Colerain Township at time of 1920 census.7 Mary Gertrude Armer witnessed Obituary:
Mrs M. Gertrude Myers fifty one, wife of John W. Myers, died at 6:15 am Monday, at her home in White Horse. Death, according to Deputy Coroner j. E. Hostetter, was cause by an acute heart attack.
She was born in Paradise Township, daughter of Mrs Elvina Z. Armer, and the late Samuel Armer. The deceased was a member of Chris Penn Chapter No. 455, Order of the Eastern Star.
She is survived by her husband, daughter Alta, wife of Jack R. Shuler, Intercourse, her mother, Mrs Elvina Armer, Quarryville and the following brothers and sisters:
Thomas M. Armer, Gap
Anna, wife of William J. Feister, Paradise, R.D.
John W. Armer, Quarryville,
Walter L. Armer, Christiana
Samuel D. Armer, Lancaster
Frank B. Armer, Quarryville
Della, wife of Leighton Book, Hessdale
Nora, wife of Walter Denlinger, Paradise, R.D.
Two grandchildren also survive.
Funeral services were held from the late home, yesterday, Thursday at 1:30 pm with further services at 2:30 pm at Middle Octorara Church, Bart Township, with interment in adjoining cemetery. on 25 October 1943.3

He was born in Quarryville, PA, son of the late Walter L. Sr. & Mabel S. Haubert Armer. He was an active member of the First United Methodist Church of Lancaster. He was employed by Peoples Drug Stores and worked in Washington, DC as a Cafeteria and Coffee Shop manager for 25 years. Later he was transferred to their main office as Restaurant Supervisor for all of their food operations until retirement in 1986. Walter was a W.W. II veteran serving in the European Theater with the 76th Infantry Division earning the Bronze Star.