F, b. 11 April 1916, d. 22 May 2014
Ellen Minerva Rynier was born on 11 April 1916. She married Elmer William Feister, son of William Jacob Feister and Rosanna (Annie) Armer, on 22 December 1940 at St. John's United Brethren Church, Paradise, Pennsylvania; Rev. Charles Snavely officiating.1 Ellen Minerva Rynier died on 22 May 2014 at Lancaster, Lancaster, Pennsylvania, at age 98.2 She was buried on 27 May 2014 at Paradise Mennonite Cemetery, Paradise, Lancaster, Pennsylvania; Ellen R. Feister, 98, of Lancaster, died on Thursday, May 22, 2014 following a brief illness. She was the wife of the late Elmer W. Feister, who died in 1998 after 57 years of marriage.

Ellen was a graduate of the former Paradise High School, class of 1934. A homemaker, Ellen also retired after 10 years at Novelty Brush Company.

She was a life time member of St. John’s United Methodist Church, Paradise.

She enjoyed going out to eat at local restaurants. Ellen also enjoyed newspaper puzzles, gardening and watching the Phillies. She loved to vacation at Ocean City, MD and Wildwood, NJ. Ellen drove her car until she was 96 years of age and loved shopping at the former Watt & Shand department store.

Ellen’s laughter and endearing humor will be lovingly missed by her family. They would like to thank the staff at Lancaster General Hospital for their kindness and care. 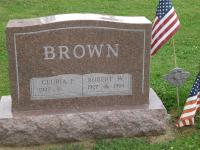 She was the wife of Marvin G. Armer Sr., who preceded her in death in 1987.
Born in Chester County, she was the daughter of the late Allan and Bertha Shannon.
Roberta enjoyed flower and vegetable gardening. She also loved Winnie the Pooh.
Surviving her are two sons, Marvin G. Armer Jr. and David L. Armer; and two daughters, Beverly J. Armer and Melanie R. Shenck, wife of Robert.
She was preceded in death by a daughter, Cheryl A. Armer, in 2003.

Funeral services will be held at 11 a.m. on Tuesday, Sept. 16, at the Harris-Mountain Funeral Home, 1030 E. Lincoln Highway, Coatesville.

Family and friends may call beginning at 10 a.m. on Tuesday at the funeral home.

Private interment will be in Fairview Cemetery, Coatesville.
Online condolences may be made by visiting www.harrismountainfuneralhome.com.1 Roberta (Bonnie) Shannon Find-a-Grave.com ID # an unknown place ; 75754152.
As of 16 December 1950,her married name was Armer.2