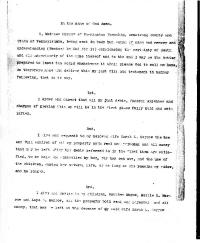 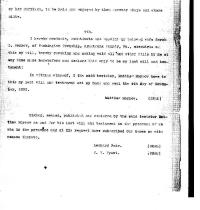 As of 15 October 1895,her married name was Bowser.4 Sarah Lucinda Bowser was principle in action at county court. Proof of her marriage as she signed her name S L Bowser on 25 November 1895 at Washington Township, Armstrong, Pennsylvania.9

She and Jacob M Bowser appeared on the census of 21 June 1900 at North Buffalo, Armstrong, Pennsylvania. According to this census, Sarah was mother to 3 children, 3 living. Assuming older children were not counted.4

From: The Simpson's Leader-Times, Kittanning, Pennsylvania, on Saturday April 29, 1916, Page 4 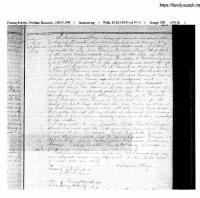 Frank Mast was born on 2 March 1855 at Clarion, Pennsylvania.1 He married Letitia Hays, daughter of William John Hays II and Letitia Ann Morrow, on 15 July 1879.1 Frank Mast was buried in 1945 at St Mary's Episcopal Cemetery, Madison Twp, Red Bank, Armstrong, Pennsylvania,in row 7, plot 12.2 He died on 2 September 1945 at age 90.3 Frank Mast Find-a-Grave.com ID # 44591907.
He appeared on the census of 1880 at Madsion Township, Armstrong, Pennsylvania; at age 25. Also living in household was Letitia Hays age 12. Is this wife Lettitia's neice?4 He was postmaster at Rimer since 1892. He began his business career as an employee on Allegheny Valley Railroad and later followed mining. In 1885 he embarked in general merchandising at Rimerton (Rimer Post Office). in 1914.1 He witnessed the death of Letitia Hays on 24 April 1917 at in her home, Rimerton, Armstrong, Pennsylvania; Cause of death was bronchial pneumonia.5,6

Donald Eugene McCauley was born on 9 November 1942 at Pennsylvania. He married Nancy Mae Kreider, daughter of Lester Groff Kreider and Thelma Anetta Walker, on 6 July 1963.1 Donald Eugene McCauley died on 21 July 2015 at at home 3551 Lincoln Hightway E, Kinzers1, Lancaster, Pennsylvania, at age 72. His obituary read:
Donald E. McCauley, 72, of Kinzers, died at home on Tuesday, July 21, 2015 after a long illness. He was the husband of Nancy (Kreider) McCauley for over 52 years.

Don worked as a mason for RF Groff of Kinzers. Later, he worked as an electrician for Clark Mechanical Services, from where he retired.

He enjoyed all of the times in Potter County at their cabin, Killdeer Camp. Don always had a garden which was his pride and joy to the very end. Although his last few months were a struggle, he never gave up and enjoyed his life. He also enjoyed hunting, fishing watching NASCAR and his favorite drivers, Dale Earnhardt and Dale, Jr., and spending time with his family.

There will be a viewing on Sunday, July 26, 2015 from 6 until 8:00 PM in the Bachman Funeral Home, 7 South Decatur Street, Strasburg, PA, and again on Monday July 27 from 10 until 11 AM in Kinzer Mennonite Church, 45 N. Kinzer Rd., Kinzers, PA. The funeral will be 11 AM in the church with Pastor Dwight Groff officiating. Interment in Paradise Mennonite Cemetery will follow.2 He was buried on 27 July 2015 at Paradise Mennonite Cemetery, Paradise, Lancaster, Pennsylvania.2 Donald Eugene McCauley Find-a-Grave.com ID # 149695456 + family links.
He was a mason for RF Groff and later he worked as electrician for Clark Mechanical Services where he retired. at Kinzers, Lancaster, Pennsylvania.3 He witnessed a combined surprise wedding anniversary party was given to Harry & Sue Gregg, Bill and Marian Groff, and Nancy and Don McCauley by their children. in June 1988 at Christiana Legion Pavillion, Christiana, Lancaster, Pennsylvania.4