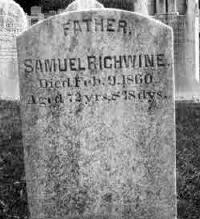 From Find-a-grave web site, photo taken by Todd Yarbrough.
Samuel Richwine was born on 22 January 1788 at Watchmaker?1 He married Esther Gaut on 30 September 1819 at Trinity Evangelical Lutheran Church, New Holland, Lancaster, Pennsylvania.3,2 Samuel Richwine married Mary Beeler, daughter of Johannes Beeler Jr and Catherine Good, circa 1844.1 Samuel Richwine died on 9 February 1860 at age 72.1 He was buried on 12 February 1860 at Rancks Methodist Church Cemetery, New Holland, Lancaster, Pennsylvania.1 Samuel Richwine Find-a-Grave.com ID # 25457474.
Email received:
I do apologize for taking so long to get back to you, but just have too much else going on right now to devote much time to genealogy--don't usually work on this sort of thing in the summer and my finding what Sue had posted was completely accidental. Anyway, I am not currently doing any research that involves the Richwine family, but I am always interested in finding new information.

Most of what I know comes from the Bible record cited previously in the message to Sue, which she shared with you. It was among several generations of other such records of the Gault Family passed down to us. My assumption that the Samuel Richwine who appeared in Lancaster County on the 1850 census was the same Samuel as the one listed there in 1830 and 1840 was because there did not seem to be any other Samuels of that age anywhere else in Lancaster County or even in Pennsylvania--at least that were heads of households--prior to 1850. Given that the 1840 census suggested that his wife had died, which the Bible records confirms, it made sense that he might have remarried after 1840. While his age, if born in 1788, may seem slightly off on the two census records that match "our" Samuel's family--in 1830 he is listed as 30-40 and in 1840 is listed as 40-50--you will note that the age of "your" Samuel is given as only 60 on the 1850 census, which also does not match what is on his tombstone as the age given on that would suggest he was then 62. Is there any separate primary documentation that actually gives his birth date as 22 January 1788 or has this been deduced from the age given on the stone? While the information on the majority of stones can usually be considered accurate, having worked on researching and compiling records of cemeteries in this area, I have discovered that neither dates nor ages from this source can be considered completely infallible. Of course, Bible records can also contain errors and census records are not even close to being infallible.

Whatever the case, it seems apparent that there must not have been much contact between what I consider Samuel's first family and his second, and that may have been because not many of the first family appears to have survived. Referring to the list I sent to Sue, Catherine (my husband's ancestor) died in 1841, and her son's family were close to her husband's second wife, but knew virtually nothing about the Richwines. Her younger sister Mary died in 1839, just after their mother, and the two youngest, Henry and Solomon, although apparently living in 1840, do not appear anywhere on the 1850 census that I can find ,so may have also died; they certainly would not have been old enough to have married by then. That leaves Joseph, Elizabeth and Samuel, who were a bit older. I am not sure what may have to happened to the first two, but do know that Samuel did survive and lived in Lancaster County as there is a Samuel Richwine buried at Weaverland Cemetery whose tombstone bears the exact same full birth date as the one recorded in the Bible, and next to his is a matching stone for his wife Elizabeth. There also is a stone there for their son, Samuel H. Richwine and wife Ida Myer. We took photos of these, which I just ran across yesterday, and the inscriptions are very clear and give full dates. We happened to find these graves while looking for those of Stauffer relatives when we were in the area, although at the time we were not sure how they were connected.

In case you are interested, here are the dates as I copied them at the time and as they can be read from the photographs:

This is really about all I know at the present time. I think the primary question is that if you think that the same Samuel was not married to both Esther (definitely the mother of the children recorded in the Bible), and to your Mary Beeler, then where was Mary's Samuel before 1850? The one in Lancaster County in 1840 definitely had a family that matches Esther's children. If you know, or find, other information that sheds some light on this, I would appreciate hearing from your. 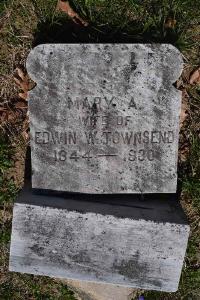 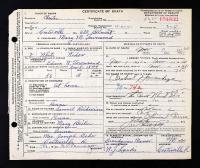 She was buried on 15 November 1930 at Forks of the Brandywine Cemetery, Glenmoore, Chester, Pennsylvania.5
Her married name was Townsend.2 Anna Mary Gregg was beneficiary of check for $200 paid to her Grandmother for support from her father's estate on 29 March 1875 at Lancaster City, Lancaster, Pennsylvania.6

M, b. 1849
Aldus Armor was born in 1849 at Pennsylvania.1
He appeared on the census of 18 July 1860 at Bart Township, Lancaster, Pennsylvania.1 He and Robert Armor ended military service on 18 July 1865 at Raleigh, North Carolina. Both were mustered out of service together.2 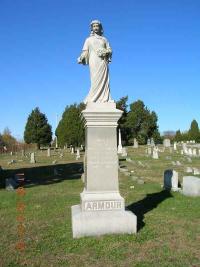 M, b. 16 January 1854, d. 13 December 1879
Augustus Boyd Feister was born on 16 January 1854.1 He died on 13 December 1879 at age 25.1 He was buried on 16 December 1879 at Pequea Presbyterian Cemetery, Gap, Lancaster, Pennsylvania.1
Augustus Boyd Feister was also known as Boyd Fiester. He appeared on the census of 8 August 1870 at Salisbury Township, Lancaster, Pennsylvania; He is listed as living as a laborer with Milton S. Koffroth, 30, his wife Margaret J,29, their son, age 1, Isaac N., a female domestic,Margaret Ramsey, 14. Koffroth is listed as a farmer.2 He witnessed Court Quarter Sessions file, NOv 1877 F052 QS. The complaint of Isaac Walker of Leacock Township, Lancaster County, taken before W. Kennedy, a justice of the peace in and for said county on the affirmation of the said Isaac Walker on the 1st day of October, 1877. The said Isaac Walker says that on the 29th day or 30th day of September 1877, Boyd Fiester did feloniously steal, take, and carry away from his the defendants premises at Leacock Township in said county a quantity of honey and bees, the goods of him the said Isaac Walker and of the value of twenty dollars.
Boyd Fiester was charged with stealing Warrant issued to William Blair (whose address is Gordonville) as constable. Same day defendant is brought before me by said William Blair. Hearing waived by defendant and he, neglection or refusing to find Bail for his appearance at the next court of Quarter Sessions to answer said charge, he is committed in default of such bail to the jail of Lancaster County, there to remain until he be thence delivered accourting to law. Commitment issued to said William Blair as constable. on 1 October 1877.3 He appeared on the census of 1880 at Leacock Twp, Lancaster, Pennsylvania; Listed on U.S. Federal Census Mortality Schedules, 1850-1880. He is listed again in the unknown townships. cause of death appears to be an injury of some sort.4 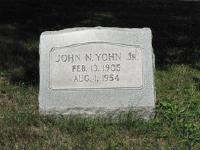