Boyd H. Richardson, 58, of Adrian RD 1, died at 11:20 p.m. (June 5, 1957) in Armstrong County Hospital, where he had been a patient for the past three weeks. Mr. Richardson was born July 18, 1898 in East Franklin Township, a son of Samuel and Mary Elizabeth (Beck) Richardson. He was a member of Pittsburgh Lodge Loyal Order of Moose. Surviving are two sons, James H. Richardson and John W. Richardson, both of Kittanning; a daughter, Mrs. Paul Reeseman of Kittanning RD 1; 6 grandchildren; a brother, Walter Richardson, and a sister, Mrs. William Anderson, both of Applewold. Friends may call at the Smith funeral home, where funeral services will be held at 2 o'clock Saturday afternoon. Burial will be made in the family plot in Kittanning cemetery. 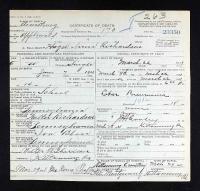 F, b. 1896
Elsie Flora Moore was born in 1896 at Pennsylvania.1,2 She married Boyd Henry Richardson, son of Samuel Henry Richardson and Mary Elizabeth Beck, circa 1920.1,2
Her married name was Richardson.1 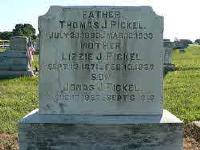