Grace Mildred Feister was born on 29 December 1906 at Salisbury Township, Lancaster, Pennsylvania. Birth certificate states Grace was # 6th child, only 3 living at this time.1,3,2 She married Samuel Smith circa 1908.4,3 Grace Mildred Feister died on 21 October 2007 at Conestoga View, Lancaster, Lancaster, Pennsylvania, at age 100; Grace M. Smith, 100, of Lancaster went to be with the Lord at Conestoga View on Sunday, October 21, 2007. Born in Salisbury Township, she was the daughter of the late S. Milton and Amanda Miller Feister. She was the wife of the late Samuel Smith who died in 1966.

She was a member of First Church of God. During World War II, she participated in the war effort by her employment at Armstrong Cork Co. and Commercial Crystal. After the war, she was a homemaker.

She is survived by daughters, Joan E. wife of Fred Shoffstall, Barbara Meister, both of Lancaster, and M. Delores, wife of Ronald Bearley of Columbia, ten grandchildren, fifteen great-grandchildren and one great, great grandson. She was the last of her five brothers and sisters. 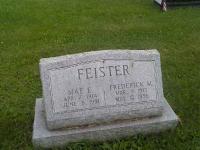 Frederick Milton Feister was born on 9 March 1915 at Gap, Salisbury Township, Lancaster, Pennsylvania.4,5,3 He married Mae Elizabeth Kiehl, daughter of Clarence Kiehl and Margie Grabill, on 11 February 1938.6 Frederick Milton Feister died on 12 May 1996 at Marcus Daly Memorial Hospital, Hamilton, Montana, at age 81. His obituary read:
Lancaster New Era (PA) - Tuesday, May 14, 1996
Deceased Name: FRED FEISTER, 81, FORMER COUNTIAN
Fred M. Feister, 81, of Hamilton, Mont., died Sunday at Marcus Daly Memorial Hospital after a short illness.
He lived in Lancaster County most of his life before moving to Montana in 1994.
He was married to Mae Elizabeth Kiel Feister, who died in 1991.
He worked as a farmer and a truck driver and diesel mechanic for John S. Ewell Co., East Earl, before retiring in 1980.
He was an avid hunter and fisherman.
Born in Salisbury Township, he was the son of the late Milton and Amanda Miller Feister.
Surviving are a son, Russ, husband of Pat Feister, Corvallis, Mont; two daughters, Audrey, wife of John Evans, of Ronks, and Margie, wife of Barry Furnier, of Stevens; seven grandchildren; five great-grandchildren; a brother, George of East Earl; and two sisters, Grace Schmidt of Lancaster and Alice Summers of Boonsboro, Md.4,5 He was buried on 15 May 1996 at East Petersburg Mennonite Cemetery, East Petersburg, Lancaster, Pennsylvania.7,8 Frederick Milton Feister Find-a-Grave.com ID # 107018653.
He appeared on the census of 1920 at Salisbury Township, Lancaster, Pennsylvania.1 He was a farmer and truck driver and worked as a diesel mechanic for John S ewell, Co, East Earl, PA. before 1980.5 He lived after 1994 at Montana.5 He lived before May 1996 at Corvallis, Ravalli, Montana.4 His Social Security Number was (an unknown value) on 12 May 1996.2,3 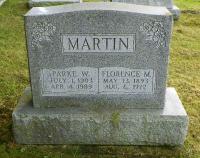 Surviving is a daughter, Marlene F. Rice of Christiana. She was preceded in death by a daughter, Linda Jean Rice, 2 siblings: Salome E. & J. Clayton Deshong. Funeral service will take place from the Shivery Funeral Home, 111 Elizabeth Street, Christiana, PA on Friday, November 13th at 2 p.m. with a viewing time from 1 p.m. until time of service. Rev. Douglas Hileman will be officiating. Interment will be in the Middle Octorara Presbyterian Cemetery. shiveryfuneralhome.com.2
She appeared on the census of 1920 at Salisbury Township, Lancaster, Pennsylvania.1 As of after 1920,her married name was Rice.4