Alice Elizabeth Briggman was born on 3 March 1927 at Manchester, Delaware, Iowa.1 She married Joel Gilson Biggs Jr., son of Joel Gilson Biggs and Olive Genevieve Ulmer, on 5 July 1946 at Tucson, Pima, Arizona.1 Alice Elizabeth Briggman died on 30 May 2004 at Quasqueton, Buchanan, Iowa, at age 77.1 She was buried on 3 June 2014 at Quasqueton Cemetery, Quasqueton, Buchanan, Iowa.2
As of 5 July 1946,her married name was Biggs.1

Mrs. Nancy Henry Burned to Death at Monaca; Body Discovered By Her Daughter-In-Law.

Mrs. Nancy Henry was burned to death at the home of her son, James Henry, of Pacific avenue, Monaca, at 11:30 o’clock this morning. Mrs. Henry is an aged lady and made her home with her son. She has been an invalid for some time and while sitting in her bed room sewing this morning, lighted a pipe and started to smoke. In some manner her clothing caught fire and she was burned to a crisp. Her daughter-in-law, Mrs. Henry, started upstairs to see if she wanted anything and detected smoke when she entered the hall. Hastily running upstairs she discovered Mrs. Thomas lying on the floor at the bed room door. When the unfortunate woman’s clothing caught fire it is supposed she tried to get downstairs, but was so weakened that it was impossible and she sank to the floor. Mrs. Henry immediately called Dr. J. J. Allen, who arrived in a very short time, but too late to save her as she passed away shortly after his arrival. Mrs. Henry was twice married and the following children survive her: Mrs. Jane Campbell of Rochester; Mrs. Mary Balzer, of Kittanning; Isaac Chrisman, of Parkers Landing, and Mrs. Mary Black, of Monaca, all children of the late William Chrisman, of Kittanning, who died of wounds received during the Civil War. In 1870 Mrs. Chrisman married William Henry, also of Kittanning, who died several years ago and the following children survive: James, Cornelius, Henry and Mrs. Charles Grimm, of Monaca, and Mrs. Laura Fischer, of Fallston. Also three brothers, John, James and Hugh Hooks, three sisters, Mrs. Caroline Johnston, Mrs. Bell Bowser and Mrs. Phoebe Maginnis, all of the vicinity of Kittanning. The deceased was a member of the First Methodist Episcopal church of Monaca. The funeral arrangements had not been made at this writing. The fire department was called out but were not needed.

She was buried on 5 March 1908 at Union Cemetery, Monaca, Beaver, Pennsylvania. Note: Nancy's grave is unmarked per research of the cemetery records in March 2016 by Jay Cujas.4 Nancy Jane Hooks Find-a-Grave.com ID # 142937960 + family links.
She appeared on the census of 24 September 1850 at Madison Township, Armstrong, Pennsylvania.5 As of 24 September 1850, Nancy Jane Hooks was also known as Nansan Hooks.5 As of 27 August 1857,her married name was Crisman.3 She appeared on the census of 18 July 1860 at Worthington, Franklin Township, Armstrong, Pennsylvania.1 As of 31 January 1871,her married name was Henry.2 She was listed as a resident in William Henry and Nancy Jane Henry's household in the census report on 1 June 1900 at Pennsylvania Ave, Monaca, Beaver, Pennsylvania; Also a boarder, William Johnson, b dec 1870.
Census also states that James was married for 5 years, had 4 children, three living.
Nancy was mother of 11 children, 9 living at time of this census.6

As you drive east on Center School Road, this is the sign that you will see on your right. Walk up the trail in front of the sign for 20 feet, then turn right and walk 50 feet.
Added by: Alan Saltsman
6/16/2009
John B Hooks was born circa 1852 at Pennsylvania.1 He died on 27 June 1927 at Kittanning, Armstrong, Pennsylvania. Cause of death was being accidentaly struck by passenger train while crossing track at crossing protected by flash lights / signal.2 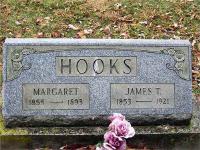 James Toy Hooks was born on 5 October 1853 at Pennsylvania.1,2 He married Margaret Jane Gibson circa 1876.3 James Toy Hooks died on 4 May 1921 at Washington Township, Armstrong, Pennsylvania, at age 67. Cause of death was Normic poisoning due to enlarged prostate.2

He was buried on 6 June 1909 at Kittanning Cemertery, Kittanning, Armstrong, Pennsylvania.3
He was a farmer before 1909.3

Lemuel N Ammon witnessed the death of Sarah Jane Ammon on 13 February 1912 at Salisbury Township, Lancaster, Pennsylvania; She died only 1 month after her husband, Henry Ammon. Cause of death was areterial sclerosis.5

Lemuel N Ammon was a former postmaster, US Post Office. before 1941 at Gap, Lancaster, Pennsylvania.1

Benjamin F Brookfield was born on 26 November 1802 at Woodbridge Township, Middlesex, New Jersey.2 He died after 1845.1