Margaret was a graduate of the former Salisbury High School in 1927. She retired from the former Hershey Garment Company in 1977 after 28 years.

Margaret was a member of Grace Point Church of Paradise since 1927 and a past member of the Ronks Fire Company Auxiliary.

She enjoyed crocheting afghans, doilies and dolls, and these are treasured gifts given to nieces and nephews and many others. Aunt Margaret will be remembered with affection by her 22 living nieces and nephews for her kind heart and for keeping up with us and our families. She was a walking encyclopedia.

There will be a Viewing on Monday, December 21, 2015 from 2:00 until 2:30 PM in the West Bethany Chapel at Landis Homes. The Funeral is 2:30 PM in the Chapel with The Reverend John Landis officiating. Private interment in Paradise Mennonite Cemetery.

In lieu of flowers, memorial contributions in her memory to The Caring Fund at Landis Homes, 1001 East Oregon Road, Lititz, PA, 17543 would be appreciated.

Census taker was Willis Kreider for this district in Salisbury Township, pages written by him.
As of 1 June 1933,her married name was Denlinger.2 She was a garment worker retired after 28 years in 1977 at Hershey Garment Facotry, Paradise, Lancaster, Pennsylvania.5

Wenger.-Levi Wenger was born near Intercourse, Pa., Sept. 11, 1861; died at the same place Sept. 13, 1926; aged 65y. 2d. On Sept. 9, paralysis laid hold on his body and apparently he realized his condition because he asked the family to gather in the old homestead and at midnight an impressive prayer meeting was held, after which he admonished the family to put their trust in God, as there is none other to look to for help. All the children were at his bedside and while his desire was to stay with the family, he said he was willing and ready to go. He lingered until the following Monday when he said, "The time will not be long," and at 11:45 P. M. he fell asleep in Jesus, without a struggle. He was a lifelong member of the Hershey Mennonite Church and a faithful Sunday school worker. A large class of adults will miss their teacher, who while with them often studied until the midnight hour that he might bring something worthwhile to his class. Members of this class served as pall bearers. Our brother was a friend of friendless and needy children, and at various times sheltered those who were in need. Mother, children, and grandchildren will miss him, but if they are faithful to Him who has called father hence, they soon shall meet where parting is unknown. Those left to mourn their loss are; his bosom companion, Oliver H., Margaret L., (wife of Willis Kreider), Amos C., Catherine M., (wife of Benj. Kreider), Christian L., Mary E., (Wife of Irwin Groff), and Sarah E.

Funeral services were conducted at the house on Sept. 16, by Bro. John B. Senger and at the Hershey Mennonite Church by Bishop C. M. Brackbill. Interment in the adjoining cemetery.1 Levi Wenger Find-a-Grave.com ID # 120186428 + family links.

Wenger.-Sarah Wenger, widow of the late Levi Wenger, and daughter of the late Christian and Magdalene Hershey, was born in Paradise Twp., Lancaster Co., Pa., Jan. 18, 1860; died of infirmities of age Aug. 28, 1944; at the home of her son-in-law, Irwin L. Groff; aged 84 y. 7 m. 10 d. Her husband preceded her in death almost 18 years ago. Surviving are one son and 4 daughters (Margaret, wife of the late Willis Kreider, Kinzers; Catherine, wife of Benjamin Kreider, Gordonville; Christian, Salunga; Mary, wife of Irwin Groff; and Sarah E., Gordonville), 23 grandchildren, 33 great-grandchildren, and 2 brothers (Abram, Detroit, Mich; and Joseph, Kinzers). One daughter and 2 sons (Susie E., Oliver H., and Amos C.) preceded her in death. She was a member of the Hershey Mennonite Church and attended services as often as circumstances and health permitted. Mother took sick Feb. 29, and began to fail rapidly. The last moments of her life she suffered much, but when God saw fit, she sweetly passed on. Funeral services were held Sept. 1 at the home of Irwin L. Groff and at Hershey's Church, in charge of Bros. Martin Hershey and Parke Book. Texts, Ps. 37:37; Job 14:14. Burial was made in the adjoining cemetery.1 Sarah Wenger Find-a-Grave.com ID # 120186715 + family links and obit.
She appeared on the census of 6 June 1860 at Paradise Township, Lancaster, Pennsylvania.3 She appeared on the census of 25 July 1870 at Paradise Township, Lancaster, Pennsylvania.4 As of before 1883,her married name was Wenger.1

Magdalene Metzler was born on 12 October 1824 at Paradise, Lancaster, Pennsylvania.2 She married Christian Hershey, son of Christian Hershey and Susanna Hershey, before 1840.1 Magdalene Hershey died on 7 January 1906 at Paradise, Lancaster, Pennsylvania, at age 81.2 She was buried on 10 January 1906 at Hershey Mennonite Church Cemetery, New Milltown, Lancaster, Pennsylvania. Her obituary read:
Hershey. - Magdalena Metzler Hershey, widow of Christian Hershey, died Jan. 7th, 1906, in her 82nd year. She was feeble for many years. Great pain sometimes. Had much patience in her afflictions. Longed to go home. Died with a blessed assurance and told her children not to weep for her, but to rejoice. Funeral on the 10th. Services at the house by John Senger. At Hershey's Church by Amos Hoover, Bishop Isaac Eby and C. M. Brackbill. Bishop Eby had for his text Rev. 14: 12, 13. Interment in the adjoining graveyard.

Hershey - On the 7th of Jan., 1906, in Paradise Twp., Lancaster Co., Pa., of the infirmities of old age, Magdalena Hershey, widow of Christian Hershey, in her eighty-second year. She leaves four daughters and five sons to mourn her death. Buried on the 10th at the Hershey's meeting-house. 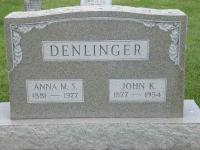 BARGE.-July 26th, 1896, near Strasburg, Lancaster Co., Pa., of injuries received at a railroad crossing, Enos N. Barge, aged 23 years, 2 months and 28 days. Funeral on the 29th at the Strasburg Mennonite M. H., where over two thousand people met in sympathy and respect for the family. Services by A. H. Brubaker and Elias Groff, from Psa. 50:15.

Death, dear Enos, bore you from us
And we take the last farewell
Of our dear and loving Enos,-
Why he's gone we cannot tell.

Dearest Enos, how we miss thee
When we see thy vacant chair,
When we look around to see thee
Naught but sorrow see we there.

We'll not murmur though we miss thee,
Rest thee now from all thy care;
Soon we hope with wings celestial
To be borne thy joys to share.