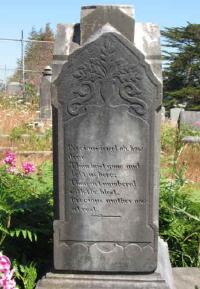 Grace (?) was born on 9 September 1825 at Gwinear, Cornwall, England. Her father's name was John ? and Mother was Ann ?1 She married Joseph Williams, son of Robert Williams and Ann Thomas, on 27 May 1852 at Camborne, Cornwall, England.1 Grace (?) died on 25 April 1897 at Newport, Marshfield, Oregon, at age 71.1
As of 27 May 1852,her married name was Williams.1 She and Joseph Williams emigrated between 1860 and 1871 from Cornwall, England; Joseph likely emigrated to America at some point after 1860 possibly with brother Thomas. His family may also have emigrated at this time.1 Grace Williams was a housekeeper on 11 June 1880 at Newport, Coos, Oregon.2 She appeared on the census of 11 June 1880 at Newport, Coos, Oregon. Grace is recorded as being a widow at time of this census. Only son Joseph is living with her and he is single.2

Robert John Williams was born in May 1856 at Camborne, Cornwall, England.1 He died on 2 November 1908 at Coos Bay, Coos, Oregon, at age 52. Obituary published Nov 3 1908 in Coos Bay Times:
Pioneer Libby Miner died late last evening.
John Williams succumbs to complications of Diseases after long illness-Funeral Tomorrow.
John Williams, a well known miner of Libby and a resident of this section for more than a quarter of a century died late last evening from a complication of diseases. He had been ailing for some time. He was one of the best known coal miners in this section.
He was a bachelor, residing with anothe bachelor brother, Joe Williams, at Libby. Besides the brother, a sister, Mrs Sleep, resides in Marchfield. He has several cousins in this city.
While the arrangements have not been completed, it is expected that the funeral will take place Wednesday afternoon.1
He emigrated with Joseph Williams and Grace Williams between 1860 and 1871 at Cornwall, England; Joseph likely emigrated to America at some point after 1860 possibly with brother Thomas. His family may also have emigrated at this time.1 Robert John Williams immigrated in 1874 to Coos, Oregon, from Cornwall, England 3 years after his brother and is recorded as being a Naturalized citizen as of this census but his older brother is not naturalized as yet.2 He appeared on the census of 4 June 1880 at Township 2, Amador, California. John appears to be living in a boarding house with about 12 men, all miners except one blacksmith.3 He appeared on the census of 20 June 1900 at Coos, Coos, Oregon.2 He was a coal miner on 20 June 1900 at Coos, Oregon.2 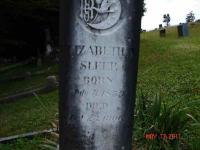 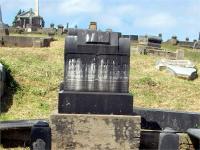 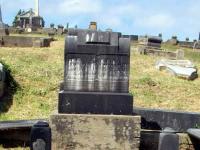 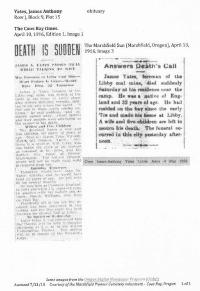 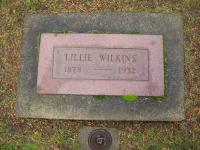 F, b. November 1886
Mabel Yeates married Gomer Jones.2 Mabel Yeates was born in November 1886 at Newport, Coos, Oregon.1,3
Her married name was Jones.2 She appeared on the census of 9 June 1900 at Newport, Coos, Oregon.3 She and Gomer Jones appeared on the census of 2 January 1920 at Redmond, King, Washington.2

M, b. 1882
Gomer Jones married Mabel Yeates, daughter of James Yeates and Mary Jane Williams.1 Gomer Jones was born in 1882 at California.1
He and Mabel Jones appeared on the census of 2 January 1920 at Redmond, King, Washington.1 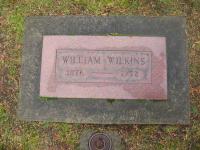