David F Rineer was born on 29 August 1916 at Pennsylvania.1,2 He married Miriam S McComsey, daughter of Sides McComsey and Susanna Stoner, after 1925.3 David F Rineer died on 23 May 1955 at Lancaster General Hospital, Lancaster, Lancaster, Pennsylvania, at age 38. Mother's name is spelled Hubbard on his death certif.1,2

He was buried on 26 May 1955 at Middle Octorara Cemetery, Quarryville, Lancaster, Pennsylvania.2 David F Rineer Find-a-Grave.com ID # 91469561 + family links.
He, 33, appeared as Head of Household on the census of 4 April 1950 at Bart Township, Lancaster, Pennsylvania. Also on this census were two children, David, 12, Charles, 10.4 He was a track forman for Pennsylvania Railroad before 23 May 1955.2 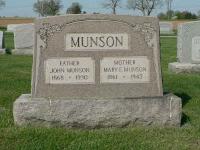 He was employed as a Mechanical Engineer with U.S. Steel for over 30 years. Upon his retirement, he held several positions with different companies, and retired in 2015 from St. Mary Medical Center, where he repaired stretchers and wheelchairs. Mr. Haubert was a member of the Fairless Hills Elks. He loved boating, nature, camping, and spending time with his family.

Son of the late John B. Sr. and Mary Alta (Munson) Haubert, he was also predeceased by his loving wife Marilyn (Titus) Haubert and his granddaughter Kelsey Allen. Jack is survived by 3 daughters and a son-in-law, Linda Allen of Pittsburgh, PA (and her fiancé Mike Reid), Cheri and James Revitsky of N. Wales, PA, and Lorri Haubert-Sutterley of Yardley, a sister Marian Simes of Lancaster, 6 grandchildren, Shelby Allen, Alexis, Benjamin and Nicole Revitsky, and Danielle and Marlee Sutterley, a great grandson Kaleb, a brother-in-law James Titus, 3 nieces, Megan Pennypacker, Michelle (and husband Sean) Simon, and Patricia (and husband C. Scott) Cargill of Florida and several great nieces and nephews.

Relatives and friends are invited to attend his funeral service at 1 PM on Saturday, March 26, 2016 at the J. Allen Hooper Funeral Chapel, 41 W. Trenton Ave., Morrisville, PA (www.hooperfuneralchapel.com). The Rev. Wendy Bellis, Pastor of the Morrisville United Methodist Church, will officiate. Interment will be held privately at the convenience of the family. Friends may call Saturday from 11:30-1 PM at the funeral chapel.

F, b. 1896, d. 1968
Cordelia Autman was born in 1896.1 She was buried in 1968 at Bellevue Presbyterian Cemetery, Gap, Lancaster, Pennsylvania.1 She died in 1968.1
She witnessed the death of Ettie Estella Haubert on 23 June 1950 at Rural, West Hempfield Township, Lancaster, Pennsylvania; Cause of death was Acute Cerebral Hemorrhage, due to hypertension and chronic myocarditis.2

She was buried on 30 December 1959 at Paradise Mennonite Cemetery, Paradise, Lancaster, Pennsylvania.3 Eva Haubert Find-a-Grave.com ID # 54386464 + family links.
As of before 1921,her married name was Haubert.1