She was the widow of Roy C. Houck and a
member of Covenant Methodist Church. Born in Lancaster, she was the daughter of the late John and Elsie Herr Hampey.

She is survived by one sister, Elizabeth M., wife of Thomas E. McGinnis, Lancaster; and one brother, John R. Hampey, Reisterstown, Md. 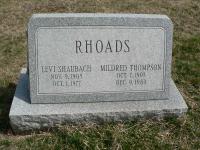