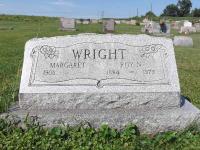 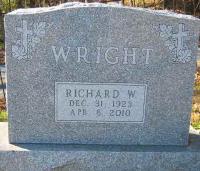 Richard W Wright was born on 31 December 1923 at Christiana, Lancaster, Pennsylvania.1 He died on 8 April 2010 at Christiana, Lancaster, Pennsylvania, at age 86.1 He was buried on 11 April 2010 at Sadsbury Friends Burial Grounds, Christiana, Lancaster, Pennsylvania. His obituary reads: Richard W. Wright, age 86, of Christiana, PA passed away at his home on Thursday, April 8, 2010. He was born in Christiana, son of the late Earl J. & Mary Catharine Witmer Wright. He was a member of the Christiana United Methodist Church where he was their organist and choir director for 65 years. He graduated from the former Christiana High School, Coatesville High School and Franklin & Marshall College of Lancaster Phi Kappa Sigma class of 1944 with an accounting degree. Dick started working at Fernald & Company of Philadelphia, Penn Dairies, Hatter, Harris & Beittel of Lancaster, KD Tool and retiring as the Controller & Treasurer of Pennfield Corp. of Rohrerstown. After retiring, he became a licensed realtor working for Coldwell Banker and ARA Real Estate Inc. He was a member of the Christiana Masonic Lodge #417 F. & A.M., Kiwanis Club of Lancaster where he was past president, co-founder of the Lanchester Chorus, treasurer of the Lancaster Community Concerts, Quarryville Groundhog Lodge and a former member of the Christiana Lions Club. He was presently serving as the treasurer for Christiana Borough.

Surviving is a sister: Marianne W. Kellon with whom he resided, 30 nieces and 19 nephews. He was preceded in death by a brother: Joseph W. Wright and a great nephew.

Funeral service will take place from the Christiana United Methodist Church, 14 S. Bridge St., Christiana, PA on Monday, April 12th, at 11 a.m. Pastor Allan Sumerfield will be officiating. Interment will be private in the Sadsbury Friends Burial Grounds. There will be a viewing on Monday at the church from 9:30 a.m. until time of service. In lieu of flowers, contributions may be made to the Christiana United Methodist Church, P.O. Box 45, Christiana, PA 17509. Arrangements by the Shivery Funeral Home, Inc. of Christiana & Paradise.

(Lancaster Intelligencer Journal/New Era 4/9/2010.)1 Richard W Wright Find-a-Grave.com ID # 50856422.
He appeared on the census of 4 April 1930 at 428 Bridge Street, Christiana, Lancaster, Pennsylvania.2 He was an organist and choir director for Christiana United Methodist Church for 65 years. before 2010 at Christiana, Lancaster, Pennsylvania.3 He was presently serving as the treasurer for Christiana Borough. on 8 April 2010.3

Marianne Wright was born on 14 April 1930 at Christiana, Lancaster, Pennsylvania.1 She married Robert G Kellon.1 Marianne Wright died on 30 July 2013 at her home, Christiana, Lancaster, Pennsylvania, at age 83. Her obituary reads: Marianne W. Kellon, age 83 of Christiana, PA passed away at her home on Tuesday, July 30, 2012. She was the wife of the late Robert G. Kellon who passed away on May 17, 1971. She was born in Christiana, daughter of the late Earl J. & Mary Catherine Witmer Wright. She was a member of the Christiana United Methodist Church where in the past she had sang in the choir. Marianne worked for Harrison Senior Living of Christiana for over 20 years as an aid. She graduated from Scott High School. In the past she was a member of the Lanchester Chorus. She enjoyed baking and spending time with her grandchildren. Surviving are 4 children: Sherry Lynn Kellon of Gap, Kirk husband of Julie Guyer Kellon of New Enterprise, PA, Alan Kellon of Christiana, Andy husband of Eleanor Kellon of Robesonia, PA, 13 grandchildren, 23 great grandchildren, 3 great great grandchildren. Several nieces and nephews also survive. She was preceded in death by a grandson, Robert J. Kellon and 2 brothers: Richard W. & Joseph W. Wright. Funeral service will take place from the Shivery Funeral Home, 111 Elizabeth Street, Christiana, PA on Friday, August 2nd at 11 a.m. with Pastor Michael Remel officiating. Interment will be in Sadsbury Friends Burial Grounds. Friends may call at the funeral home on Friday from 10 a.m. until time of service. In lieu of flowers contributions may be made to Hospice & Community Care, P.O. Box 4125, Lancaster, PA 17604.