This photo is in possession of Johnson Family. 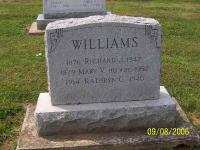 She was buried on 3 August 1940 at Georgetown Methodist Cemetery, Bart, Lancaster, Pennsylvania.1,3 Kathryn Williams Find-a-Grave.com ID # 97788541.
As of 1940, Kathryn Williams was also known as Catherine Williams.3