Jemima Anne Dunlap married Burton L. (Louis Burton) Ogden, son of Lebbius Luther Ogden and Charlotte Alleman.1 Jemima Anne Dunlap was born on 26 June 1850 at Clearfield, Pennsylvania.1 She died on 10 February 1932 at East Brady, Pennsylvania, at age 81.1 She was buried on 13 February 1932 at Brady's Bend Cemetery, East Brady?, Pennsylvania.2 Her funeral was held at Home of daughter, Mrs Samuel Girts, Kittanning, Armstrong, Pennsylvania, on 13 February 1932.2
Her married name was Ogden.1 She appeared on the census of 19 April 1910 at 523 E Dubois Ave, Dubois, Clearfield, Pennsylvania; Jemima is listed as a widow at the time of this census. Mother of 5 children, 2 living as of this census.3 She lived in 1926 at Oil City, Pennsylvania; with her daughter.2 She witnessed a visit to John and Emily Miller home on 4 March 1927 at Templeton, Armstrong, Pennsylvania.4 She lived in 1932 at First Avenue, East Brady?, Pennsylvania.2 She was member of M. E. Church.2

Gerd Penn Ogden was born on 26 June 1860 at Pennsylvania.1,2 He married Fannie A Solada, daughter of Micholas Solada and Maggie (?), on 5 May 1886 at Reynoldsville, Jefferson, Pennsylvania. Fannie had a guardian, John Saukard, who signed marriage license to allow her marriage to Ogden.
Married by Justice of Peace, E Neff.3,4 Gerd Penn Ogden died on 20 August 1939 at Maple Ave Hospital, DuBois, Clearfield, Pennsylvania, at age 79. Cause of death was Prostatic hypertrophy.2

Photo contributed by Jamie on Find-a-grave 11/26/2007
George Seth Ogden was born on 15 August 1865 at Pennsylvania.1,2 He married Sarah Catherine Henry, daughter of Frederick Henry and Caroline Neupert, before 1895.1 Seth G Ogden died on 17 May 1943 at at home, DuBois, Clearfield, Pennsylvania, at age 77; Cause of death was congestive heart failure.3,2

Born in Bayshore, L.I., Mrs. Mabb was a daughter of the late Otis and Margaret Biggs. She was a member of Silver Crescent lodge, Daughters of America, of Eatontown.

The funeral was held yesterday afternoon at the Robert A. Braun home for funerals, with Rev. David Ling, pastor of the Eatontown Presbyterian church, officiating. Burial was in Woodbine cemetery, Oceanport. 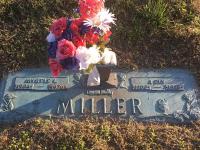