Lester Robert Kellenberger was born on 8 May 1952 at Lancaster, Pennsylvania. He married Rita Susan Lehoe, daughter of Elmer David Lehoe and Pearl Juanita Davis, on 11 September 1971 at Little Wedding Chapel, Elkton, Maryland. Lester Robert Kellenberger died on 14 April 2020 at Hospice of Lancaster County, Mount Joy, Lancaster, Pennsylvania, at age 67He was taken to Hospice on Easter Sunday and passed away Tuesday afternoon.

Lester R. Kellenberger, Sr. 67, of Willow Street passed away peacefully on Tuesday, April 14, 2020 at Hospice and Community Care, Mt Joy, with his wife Rita of 48 years by his side. He was the son of the late Raymond and Myrtle (Gregg) Kellenberger.
He retired from High Steel after 40 years.
He is survived by his wife Rita, his son Lester (Steph) Kellenberger, a daughter Amanda (Scott) Todd; 2 sisters, Evelyn (Harvey) Walton, Geraldine (William) Hensel; a brother Steven (Jill) Kellenberger; grandchildren Brianna (Wyatt) Campbell, Nathan Kellenberger, Shane Kellenberger, Amber Todd, Courtney (Shawn) Bagnall; and 3 great grandchildren Emma Campbell, Maci Campbell, and Zoltan Campbell.
He was preceded in death by his parents and a brother Raymond Kellenberger, Jr.
Services will be private. Memorial contributions may be made to Hospice and Community Care, 4075 Old Harrisburg Pike, Mount Joy, PA 17522. Arrangements entrusted to Reynolds Funeral & cremation Services, Inc. Quarryville, PA. To send an online note of condolence, please visit our website at reynoldsfuneralhome.net.His Obit.1,2 He was buried on 17 April 2020 at Burial details unknown.3 Lester Robert Kellenberger Find-a-Grave.com ID # 209128643.

Born in Lancaster, PA, on July 10, 1954, she was the daughter of the late Raymond Kellenberger, Sr. and Myrtle (Gregg) Kellenberger.

Gerry retired from Clean Enterprises, Quarryville, PA where she worked as a press operator.
In her spare time, she enjoyed playing bingo, Scrabble, board games, bowling and cards.

She is survived by her beloved husband of 49 years: William Warren Hensel, Sr; one daughter: Tabatha Hastings (Kent) of Kirkwood, PA; one sister: Evelyn Walton of Lancaster, PA; one brother: Steven Kellenberger of Holtwood, PA; 7 grandchildren and 3 great grandchildren.
In addition to her parents, she was also preceded in death by a son: William W. Hensel, Jr; and 2 daughters: Crystal Lunsford and Stacey Jean Kirby.
Funeral service will be held Saturday, March 27, 2021 at 11:00 am at Encounter Church, 300 Hideaway Drive, Quarryville, PA, with visitation beginning at 10:00 am.
Interment will follow in Little Britain Cemetery, Peach Bottom, PA.1,2
She was buried on 27 March 2021 at Little Britain Cemetery, Peach Bottom, Lancaster, Pennsylvania.2 Geraldine Ann Kellenberger Find-a-Grave.com ID # 224856682.3
As of 15 January 1972,her married name was Hensel. Geraldine Ann Kellenberger lived at 155 Little New York Rd, Rising Sun, Maryland.

Mark Timothy Gregg was born on 18 December 1962 at Lancaster General Hospital, Lancaster, Lancaster, Pennsylvania. He married Dawn DiDonato, daughter of Bruce Paul DiDonato and Nancy Elizabeth Guthrie, on 13 June 1998 at United Methodist Church, West Chester, Chester, Pennsylvania.1 Mark Timothy Gregg died on 3 March 2021 at West Chester Hospital, West Chester, Chester, Pennsylvania, at age 58. His obit: OBITUARY
Mark T. Gregg, age 58, of Coatesville, passed away on Wednesday, March 3, 2021. He was born in Coatesville, son of Ruth A. Gregg wife of Lee Henry of New Holland and J. Harold Gregg of Kinzers and the late Patricia Dowlin Gregg. He worked for Coram CVS as an IT manager. He enjoyed motorcycles, hunting, fishing, cooking, trips to Cedar Point, roller coasters and especially going to Knoebels. Surviving besides his father and mother is a daughter Cassie L. Gregg of Downingtown, 3 siblings: Jen wife of Elias "Lou" Stoltzfus of Kinzers, Stephanie wife of William Shoemaker of Cochranville, Steven husband of Dee Hayman of Wichita Falls, TX. A memorial service will take place at Chantry Place, 15 North Bridge Street, Christiana, PA, on Saturday, March 6th at 3 p.m. with a greeting time from 2 p.m. until time of service. In lieu of flowers contributions may be made in Mark's memory to the Cat Angel Network, P.O. Box 3071, Stowe, PA. 19464. If attending please abide by the current Covid guidelines. shiveryfuneralhome.com.2
He was cremated on 6 March 2021. Service was held at Christiana, PA; was cremated. Mark Timothy Gregg Find-a-Grave.com ID # 223904780.3
He was Four pals since babies. on 23 December 1999 at Paradise Fire Hall, Paradise, Lancaster, Pennsylvania.4 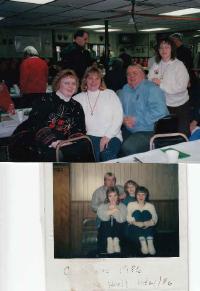 Milley Koppehele, 73, of Hamilton, passed away Tuesday, March 1, 2005 at University Hospital in Cincinnati. She was born, April 20, 1931 in Orange, Virginia, the daughter of the late Robert and Ellen (Shoemaker) Milley.

Mrs. Koppehele was a secretary for many years and was a member of the First Church of God, where she was very active in the orchestra and choir. She was the program director at Dale Hollow Lake in Kentucky for a time and also performed with the Hamilton-Fairfield Choraliers. She was also very active in the Albany, Kentucky United Methodist Church, serving as choir director. She also taught swimming lessons at the YMCA for over thirty years; was active in various women s clubs in Fairfield; taught in the OHIO READS Program and was camp director for Girls Scouts of America.

Milley is survived by her son, Eric Koppehele of Burlington, Kentucky; her daughter, Kimberly Brook Sroufe of Hamilton; her sister, Bernice Amway of Paradise, Pennsylvania.

Visitation: 5-8 PM, Thursday at The Webster Funeral Home, 3080 Homeward Way at Rt. 4, Fairfield. The funeral service will be held at 10:30 AM, Friday, March 4, 2005 at the funeral home with Rev. Dr. Keith Gebhart, officiating. Burial to follow at Rose Hill Burial Park.2 Her funeral was held at at Webster Funeral Home, 3080 Homeward Way, Fairfield, Ohio, on 4 March 2005 Services by Rev. Dr. Keith Gebhart.5 She was buried on 4 March 2005 at Rose Hill Burial Park, Fairfield, Butler, Ohio.5
Her married name was Koppehele. She appeared on the census of 12 May 1940 at Paradise Township, Lancaster, Pennsylvania.6 She was listed as a resident in Robert Benjamin Milley and Ellen B. Milley's household in the census report on 4 April 1950 at Paradise Township, Lancaster, Pennsylvania.7 Almeda Margaretta Milley lived in May 1990 at Albany, Kentucky.8 She lived before March 2005 at Hamilton, Ohio.9 She was ill with an aneurysm." Ann told me, she knows the story of how it happened. If I remember what she said - - Almeda was in her car, stopped at a red light, when she didn't go, someone checked why and found her still alive. She had an aneurysm. They kept her alive to harvest her organs. Wasn't that dumb how they had her name?" On 1 March 2005.10,11 As of 1 March 2005, Almeda Margaretta Milley was also known as Milley Koppehele.2

He was a witness when John Elias Keneagy was photographed on Mothers Day circa 1945.9

Bertram Park Keneagy, 32, appeared as Head of Household on the census of 27 April 1950 at US 30 Vintage, Paradise Township, Lancaster, Pennsylvania.10 He was employed by Lukens Steel Company as a foreman of office services. circa 1952 at Coatesville.1 He and Esther Frances Keneagy were photographed in living room at cabin circa 1964 at Buck Hollow, Shunk, Sullivan, Pennsylvania.9