William P Groff was born on 6 June 1942 at Nine Points, Lancaster, Pennsylvania.1 He married Marian Louise Brown, daughter of Floyd L. Brown and Josephine Virginia Morrow, on 25 May 1963. William P Groff died on 16 December 2011 at Lancaster General Hospital, Lancaster, Lancaster, Pennsylvania, at age 69.2 He was buried on 20 December 2011 at Conestoga Memorial Park, Lancaster, Lancaster, Pennsylvania; William P. Groff, 69, of Strasburg Township, died at LGH on Thursday, December 16, 2011, following a brief illness. He was the husband of Marian L. (Brown) Groff for over 48 years.
Bill retired from ALCOA in 2004. He was a member of the ALCOA Retirees.
He enjoyed hunting and was a member of the Strasburg Sportsman’s Association. Bill was an avid fan of Horse Racing and was a fan of Rick Hendrick’s NASCAR team. He also liked to attend garage sales.
Born in Nine Points, Bill was the son of the late Roy Ernest and Ethel May (Scheuing) Groff. In addition to Marian, he is survived by his siblings, Roy married to Hilda Groff of Nine Points, Frank married to Doris Groff of Lampeter, Sarah married to Maynard Groff of Bartville, Mary Emma married to Jay Phipps of Paradise, Harold Groff and companion Karen of Gap, Blanche Sliger of Paradise, Phianna married to Ed Kanuha of Frenchville, Kenneth Groff of New Providence, Pauline married to Charles Hanna of Lancaster and many nieces and nephews. Bill was preceded in death by a brother, Howard Groff.
There will be a viewing on Monday, Dec 19th 2011 from 6 until 8pm in the Bachman Funeral Home. Funeral is Tuesday, December 20, 2011 at 11am. There is also a viewing on Tuesday from 10am until time of service.. Interment in Conestoga Memorial Park.2 William P Groff Find-a-Grave.com ID # 82100313.3
He witnessed a combined surprise wedding anniversary party was given to Harry & Sue Gregg, Bill and Marian Groff, and Nancy and Don McCauley by their children. in June 1988 at Christiana Legion Pavillion, Christiana, Lancaster, Pennsylvania.4

Cindy Wendler and Lewis Floyd Brown were divorced in May 1992. Cindy Wendler married (?) Brubaker after May 1992.1 Cindy Wendler died on 11 August 2011 at Hospice of Lancaster, Mount Joy, Lancaster, Pennsylvania.1 She was buried on 3 September 2011; Cindy S. Brubaker, 55, of Spring Hill Acres, Lebanon, PA, formerly of Manheim and Lancaster, passed peacefully on Thursday afternoon, August 11, 2011 at Hospice of Lancaster County, Mount Joy, PA. Born in Lancaster, PA, she was the daughter of Lois I. Faus Wendler Shaub of Manheim, PA and the late Robert Jack Wendler.

A 1974 graduate of Manheim Central High School, Cindy was employed for more than 34 years as an information analyst by Armstrong World Industries. Cindy lived her life to the fullest. Her interests included scuba and deep sea diving in the Caribbean, sailboat racing on the Chesapeake Bay, taking hot air balloon excursions, mountain bike riding, horseback riding, and traveling extensively in the United States and in Europe. She was a former member of the Lancaster Ski Club and was president of the Doberman Rescue of Pennsylvania for 10 years. Cindy also attained a solo airplane pilot's license, was both a Pittsburgh Steelers and Jimmy Buffet fan.

In addition to her mother, she is survived by a sister, Jackie L., wife of Randy L. Keeney, of Lititz, PA; nephew, Christopher C. Keeney, of Manheim; a niece, Katie E. Keeney, of Lititz; and a host of valued friends. She was also preceded in death by her step-father, Earl J. Shaub.

Please visit her care page at www.caringbridge.org/visit/cindybrubaker for information concerning Fight Back for a Cure Benefit Dance Party in honor of Cindy to benefit the American Cancer Society on Saturday, August 13, 2011 from 7-11:00 PM at the Millersville VFW. Also follow her care page for future information about a memorial gathering to be held on the Chesapeake Bay. There will be no viewing. The family requests that flowers please be omitted. If desired, contributions may be made to Hospice of Lancaster County, 685 Good Drive, PO Box 4125, Lancaster, PA 17604. To express a condolence with the family or for additional information, visit www.spencefuneralservices.com.1
As of 24 September 1984,her married name was Brown. She witnessed temporary driver license issued in Village Cay, British Virgin Islands while on vacation. Actually Sue only drove about 3 blocks and turned the driving over to Lew who didn't have his drivers licence with him, therefore wasn't able to rent the vehicle. on 12 February 1988 at British Virgin Islands.3

Temporary drivers licence for E sue Gregg from British Virgin Islands while on vacation
As of after May 1992,her married name was Brubaker.1 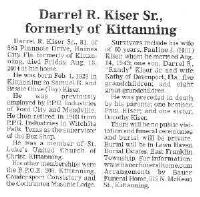