F, b. June 1876
Annie (?) was born in June 1876.1 She married Christian E Brackbill circa 1894 at Lancaster, Pennsylvania.1
As of circa 1894,her married name was Brackbill.1 Annie Brackbill and Christian E Brackbill appeared on the census of 13 June 1900 at Salisbury Township, Lancaster, Pennsylvania. Annis is recorded as being the mother of 2 children, only 1 living at time of this census. On this census Christian's sister Anna M Brackbill was living in household, age 21, born Apr 1879.1

Maurice worked as a truck driver for Raub Supply Company retiring in 1982. A member of the Millersville Mennonite Church, he and his wife, Rhoda, formerly owned and operated "Mrs. Brackbill's Baked Goods" from their home in Millersville. They also took in Millersville University Students since 1964.

Funeral Services will be held at Millersville Mennonite Church, 437 Manor Avenue, Millersville, PA 17551 on Saturday, April 16, 2011 at 11 AM with Rev. Melvin H. Thomas officiating. Interment will be in the Millersville Mennonite Cemetery. Relatives and friends are respectfully invited to view at the church on Saturday between 9:30 and 11:00 AM. Kindly omit flowers. Memorial Remembrances can be made in Maurice's memory to the church. Andrew T. Scheid Funeral Home 717-872-2266 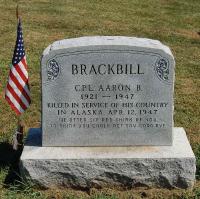 Anna retired from working in the breakfast and salad room at Millersville University. After retirement, she worked at Kitchen Kettle Village.

She was a member of Kinzer Mennonite Church. Born in Salisbury Township, Anna was the daughter of the late Ellis B. and Alice (Groff) Brackbill. She is survived by three brothers, Maurice B. Brackbill of Ephrata, Christian E. Brackbill of New Holland and J. Harold Brackbill of Loxley, AL; four sisters, Mary B. Hershey of Paradise, Rhoda E. Feister of Juniata County, Grace E. Strubel of Ronks and Alice E. Lantz of East Petersburg and many nieces and nephews. Anna was preceded in death by two brothers, Elam and Aaron, and a sister, Ruth Brackbill. 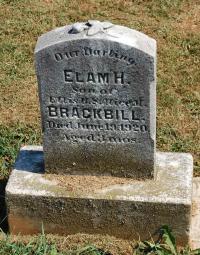 Amy Garrett was born on 17 November 1939 at Pensacola, Florida.1 She married J Harold Brackbill, son of Ellis B Brackbill and Alice Mae Groff, after 1945.1 Amy Garrett died on 3 May 2008 at Loxley, Alabama, at age 68.1 She was buried on 6 May 2008 at Beulah Community Cemetery, Beulah, Escambia, Florida; LOXLEY, ALABAMA

Amy Garrett Brackbill, a native of Pensacola and a resident of Loxley, died Saturday, May 3, 2008. She was 68.

Brackbill was a member of Loxley First Baptist Church and the Loxley Quilt Club.

A luncheon for family and friends will be held Wednesday at 11 a.m. at Loxley First Baptist Church, with visitation to follow from 1 to 2 p.m. at the church.

Burial will take place at 3:30 p.m. at the Beulah Community Cemetery in Beulah, Fla.

Arrangements are being handled by Mack Funeral Home and Crematory in Robertsdale.1 Amy Garrett Find-a-Grave.com ID # 26616261 + obit and family links.
As of after 1945,her married name was Brackbill.1

Alice Bryson was born on 9 June 1899.1 She married Levi Townsley after 1915.1 Alice Bryson died on 22 August 1992 at age 93.1 She was buried on 25 August 1992 at Atglen Methodist Cemetery, Atglen, Chester, Pennsylvania.1 Alice Bryson Find-a-Grave.com ID # 30721412.
As of after 1915,her married name was Townsley.1 She witnessed the death of Mary Elizabeth Silknetter on 16 April 1957 at Coatesville Hospital, Coatesville, Chester, Pennsylvania; Cause of death was acute myocardial infarct, length of illnes was 12 hours.2,1,3