M, b. 1899
Ralph Sheasley Claypool was born in 1899 at Pennsylvania.2 He married Carrie Mabel Morrow, daughter of William James Morrow and Mary Catherine Manning, after 9 January 1920.2 Ralph Sheasley Claypool was buried on 27 April 1977 at Kittanning Cemetery, Kittanning, Armstrong, Pennsylvania.1
He appeared on the census of 9 January 1920; and is listed living with another family, is still single and works at a Glassworks. 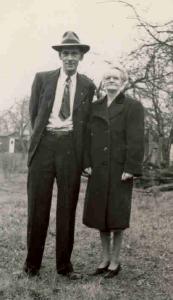 Thomas Luther Ogden was born on 13 June 1888 at DuBois, Clearfield, Pennsylvania.2,1 He married Margaret Elvie Morrow, daughter of David W. Morrow and Susannah Hays, on 4 February 1919 at Oil City, Pennsylvania.3 Thomas Luther Ogden died in 1958. He was buried in 1958 at St Mary's Episcopal Cemetery, Madison Twp, Red Bank, Armstrong, Pennsylvania; in row 6.4
He appeared on the census of 19 April 1910 at 523 E Dubois Ave, Dubois, Clearfield, Pennsylvania.5 He was employed in a general repair shop as a machinest. on 29 April 1930.6 He and Margaret Elvie Morrow appeared on the census of 29 April 1930 at 911 Fifth Ave, Ford City, Armstrong, Pennsylvania; Thomas personal value was listed as $23.00. He answered no to question about whether a veteran of any military or naval service.6

Arlene Ogden taken at home of author, 2 weeks before her death.

F, b. 10 August 1905, d. 7 April 2003
Evelyn Mechling was born on 10 August 1905 at Brocksville, Ohio.2,3,4 She married Randall Lee Hooks, son of James Lindsay Hooks and Fannie Irene Hooks, on 21 June 1923 at St Paul's Episcopal Rectory, Kittanning, Armstrong, Pennsylvania.5,6 Evelyn Mechling died on 7 April 2003 at Essex II Nursing Home, Salem, Ohio, at age 97.7,8 Her funeral was held at Oliver-Linsley Funeral Home, 644 E. Main St., East Palestine, Ohio, on 9 April 2003.3 She was buried on 9 April 2003 at Salem Reformed Cemetery, East Palestine, Ohio.9
She appeared on the census of 31 January 1920 at Rayburn Township, Armstrong, Pennsylvania.10 As of 21 June 1923,her married name was Hooks.5 She and Randall Lee Hooks were owners and operators of the circa 1950 at Randall's Bowling Alley, East Palestine, Ohio. Evelyn Mechling lived on 14 January 1998 at East Palestine, Ohio.11 Randall's Bowling Alley was one of the first bowling alleys to use automatic pin setters in the area. Evelyn was inducted into the Salem Women's Bowling Association Hall of Fame.9 According to her obit, she had 8 grandchildren, 23 great-grandchildren and 18 great-great grandchildren.9

Mrs. Mechling was a member of the Templeton Church of God and a past longtime member of the Women's Missionary Society of her church. She also was a lifetime member of the Kittanning Township Volunteer Fire Department Auxiliary. Bonnie enjoyed sewing and was known for being a seamstress and weaving rugs for many years.

She is survived by her son, Douglas R. Mechling and his wife, Jennifer, of Kittanning; her daughter, Rowena M. Tosh and Larry, of New Bethlehem; six grandchildren, Wesley Tosh and wife, Sally, Scott Tosh, Amber Titus and husband, Reed, Tara Hardsock and husband, Mark, and Thomas and Cameron Mechling; and six great-grandchildren.

In addition to her parents, she was preceded in death by her husband, Raymond E. Mechling, who she married Oct. 12, 1946, and who died April 16, 2002; two brothers, Robert B. Browell and Darwin H. Browell; and two sisters, Naida Williams and Vaunda Ramsey.

Friends will be received from 2 to 4 and 7 to 9 p.m. Wednesday at the BAUER FUNERAL HOME, 515 N. McKean St., Kittanning, where funeral services will be held at 11 a.m. Thursday with the Rev. Richard L. Molgaard officiating. Interment will be in the Widnoon Cemetery, Madison Township. Memorial contributions may be given to the Muscular Dystrophy Association, P.O. Box 78960, Phoenix, AZ 85062-8960.1 She was buried on 9 November 2007 at Widnoon Methodist Cemetery, Widnoon, Armstrong, Pennsylvania.1 Bonnie Belle Browell Find-a-Grave.com ID # 41950132.
As of 12 October 1946,her married name was Mechling.1

William P Groff was born on 6 June 1942 at Nine Points, Lancaster, Pennsylvania.1 He married Marian Louise Brown, daughter of Floyd L. Brown and Josephine Virginia Morrow, on 25 May 1963. William P Groff died on 16 December 2011 at Lancaster General Hospital, Lancaster, Lancaster, Pennsylvania, at age 69.2 He was buried on 20 December 2011 at Conestoga Memorial Park, Lancaster, Lancaster, Pennsylvania; William P. Groff, 69, of Strasburg Township, died at LGH on Thursday, December 16, 2011, following a brief illness. He was the husband of Marian L. (Brown) Groff for over 48 years.
Bill retired from ALCOA in 2004. He was a member of the ALCOA Retirees.
He enjoyed hunting and was a member of the Strasburg Sportsman’s Association. Bill was an avid fan of Horse Racing and was a fan of Rick Hendrick’s NASCAR team. He also liked to attend garage sales.
Born in Nine Points, Bill was the son of the late Roy Ernest and Ethel May (Scheuing) Groff. In addition to Marian, he is survived by his siblings, Roy married to Hilda Groff of Nine Points, Frank married to Doris Groff of Lampeter, Sarah married to Maynard Groff of Bartville, Mary Emma married to Jay Phipps of Paradise, Harold Groff and companion Karen of Gap, Blanche Sliger of Paradise, Phianna married to Ed Kanuha of Frenchville, Kenneth Groff of New Providence, Pauline married to Charles Hanna of Lancaster and many nieces and nephews. Bill was preceded in death by a brother, Howard Groff.
There will be a viewing on Monday, Dec 19th 2011 from 6 until 8pm in the Bachman Funeral Home. Funeral is Tuesday, December 20, 2011 at 11am. There is also a viewing on Tuesday from 10am until time of service.. Interment in Conestoga Memorial Park.2 William P Groff Find-a-Grave.com ID # 82100313.3
He witnessed a combined surprise wedding anniversary party was given to Harry & Sue Gregg, Bill and Marian Groff, and Nancy and Don McCauley by their children. in June 1988 at Christiana Legion Pavillion, Christiana, Lancaster, Pennsylvania.4

A 1974 graduate of Manheim Central High School, Cindy was employed for more than 34 years as an information analyst by Armstrong World Industries. Cindy lived her life to the fullest. Her interests included scuba and deep sea diving in the Caribbean, sailboat racing on the Chesapeake Bay, taking hot air balloon excursions, mountain bike riding, horseback riding, and traveling extensively in the United States and in Europe. She was a former member of the Lancaster Ski Club and was president of the Doberman Rescue of Pennsylvania for 10 years. Cindy also attained a solo airplane pilot's license, was both a Pittsburgh Steelers and Jimmy Buffet fan.

In addition to her mother, she is survived by a sister, Jackie L., wife of Randy L. Keeney, of Lititz, PA; nephew, Christopher C. Keeney, of Manheim; a niece, Katie E. Keeney, of Lititz; and a host of valued friends. She was also preceded in death by her step-father, Earl J. Shaub.

Please visit her care page at www.caringbridge.org/visit/cindybrubaker for information concerning Fight Back for a Cure Benefit Dance Party in honor of Cindy to benefit the American Cancer Society on Saturday, August 13, 2011 from 7-11:00 PM at the Millersville VFW. Also follow her care page for future information about a memorial gathering to be held on the Chesapeake Bay. There will be no viewing. The family requests that flowers please be omitted. If desired, contributions may be made to Hospice of Lancaster County, 685 Good Drive, PO Box 4125, Lancaster, PA 17604. To express a condolence with the family or for additional information, visit www.spencefuneralservices.com.1
She witnessed temporary driver license issued in Village Cay, British Virgin Islands while on vacation. Actually Sue only drove about 3 blocks and turned the driving over to Lew who didn't have his drivers licence with him, therefore wasn't able to rent the vehicle. on 12 February 1988 at British Virgin Islands.3

Temporary drivers licence for E sue Gregg from British Virgin Islands while on vacation
As of after May 1992,her married name was Brubaker.1

She was a member of Sacred Heart Church and belonged to the Knights of St. John's Auxiliary.

Sarah Lucinda Bowser was principle in action at county court. Proof of her marriage as she signed her name S L Bowser on 25 November 1895 at Washington Township, Armstrong, Pennsylvania.7

As of circa 1896,her married name was Bowser.3 She and Jacob M Bowser appeared on the census of 21 June 1900 at North Buffalo, Armstrong, Pennsylvania.3